One of the ways a drone might replace a human security guard is by performing regular monitoring and surveillance. A flying drone is capable of hovering and moving quietly all around a property for hours without getting tired. The device can also be fitted with a variety of different sensors for detecting heat or other signatures not visible to the human eye. This can greatly increase the ability to detect intruders or environmental hazards like fires.

A major disadvantage that comes with using drones is the limited response capabilities. A drone simply cannot do much once a threat or intruder is detected. Fitting weapons on a drone is not really an option since it is not legal outside of the military. A drone can simply report what is happening. Human security guards are capable of thinking fast, subduing intruders or taking any other appropriate actions. 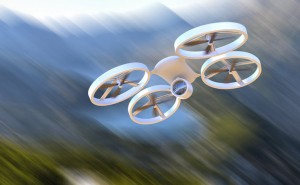 A drone has much better mobility than a human security guard does. A flying drone is capable of hovering, rising up dozens of feet into the air and maneuvering over any type of terrain. A drone can fly through narrow spaces. Some are even capable of moving much faster than a human can. This could allow drones to replace human guards in industrial and hazardous environments.

A real issue that comes with using a drone as a sole means of security is that human senses are often more effective than a simple camera. Human security guards are capable of assessing a variety of sensory information quickly to determine whether something is wrong or whether someone is a threat. Humans can use hearing, vision and tactile sensations to gain a level of awareness of the environment that is not possible with a drone. Human guards are superior especially in crowded settings.

Acting as a Deterrent

Something to consider is that a large number of people do not fully understand drone technology. A way that a drone could replace a human security guard is by acting as a deterrent. Someone who sees a drone patrolling a property might be immediately deterred from committing a crime or trespassing because the capabilities of the technology are not fully known. This can stop crime before it occurs.

The final reality about why a drone might never replace a human security guard is that someone needs to operate the device. Drones are not fully automated at the moment. The technology to have a fully autonomous drone will not be available for some time. Additionally, there would be major liability issues with an autonomous flying device. There will always be a need for a human to be monitoring and controlling any drone.